She qualified as a Chartered Engineer with British Aerospace before spending 10 years with PWC as a Management Consultant. She has been freelance for many years.

She is a charismatic leader who motivates and coaches teams to deliver optimum results.

Recently she spoke with Procurement Heads about Diversity and Inclusion.

What do Diversity and Inclusion mean to you and how do your views align with today’s society?

D&I sits across more than simply gender; it’s not just about the imbalance between men and women, it’s basically about being fair.

Sadly, I have come across prejudice in my career and it is tough, but you have to fight it when you see it and put processes in place to stop it from happening in the future.

In procurement, for example, we must ensure that D&I equality is built into all aspects of the tendering process.

I have worked across multiple sectors and organisations that all have had differing levels of success when it comes to diversity.

One public sector rail organisation I worked with really inspired me when it came to gender equality in procurement.

More than 50% of the senior procurement positions were held by women, and, to date, that is the organisation I’ve worked with which had the best balance.

However, they had no ethnic minorities on the board, something I could never understand.

When it comes to organisations’ representation of women or ethnic minorities, I have always found it was the companies that made the biggest fuss that had the worst representation. Unfortunately, the private sector is behind the public sector when talking about D&I, with some conferences I have attended being very pale, male and stale.

But, working in the public sector, I also have seen some amazing examples. For instance, a Deputy Director, who was blind, was given the right support to progress and deliver significant value.

The NHS is very integrated and has amazing values that are benefiting from different cultural backgrounds and values.

What are the benefits to an organisation that embraces D&I?

It’s simple when everyone is white and male at the top it sends a clear message to everyone else that they won’t be able to make it in that organisation. There is no evidence, no support, no inspiration and put frankly people won’t apply and the organisation misses its opportunity to attract talent.

Embracing D&I means you get a wealth of different personalities and skills in your team that can offer huge value.

What would you do to address the current imbalances?

It all starts at the top.

There must be an equal balance at the board level; if you need to lean into positive discrimination, do it.

The issue you have with this and forcing percentage models is that it can still enact the wrong behaviours.

For example, when I went to watch Top Gear a few years ago, when it came to filming, they would shuffle the women around the studio to make it look like there was a healthier balance in the audience – but this cannot happen in organisations. Some companies ask suppliers as part of a tender process to ensure diversity in their delivery teams.

You can’t just move employees around and hit a quota, you really need to eradicate discrimination from your business.

One powerful approach you can use, if staring discrimination in the face, is by attacking it head-on.

If the organisation is recruiting and you can see for example a racial bias, ensure the shortlist you present is from a minority background. If your colleague mentions needing a man to do the role, only present an all-female shortlist.

Take the choice to discriminate out of their hands.

Another approach could be fully anonymous CVs. Initial screening stages that have no tick boxes, no names and just experience and companies.

That’s how recruiting campaigns worked at NHS England and they ran smoothly.

How can Procurement inspire future generations of female Procurement practitioners to strive for a leadership role?

It’s about having female role models throughout the business, being a living example that you can succeed in procurement as a woman.

I think CIPS could run some gender-related courses to educate hiring managers around the trait phrases and how they differ between men and women.

Also, ensuring that their articles represent all backgrounds and women, or are at least talking about Diversity & Inclusion.

It’s not enough to have an agenda, you must act on it.

I have run teams of 220 people and never discriminated positively or negatively in my recruitment.

If you are exposed to discrimination of any kind, make sure you stand up to it and don’t let it get swept under the carpet. 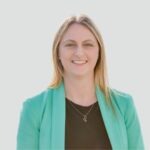