Here he discusses why he decided to join Heads Resourcing Group and what the culture is like.

Why did you choose to join Heads?

When I was interviewing for a graduate job, I spoke to a few different agencies, but the main attraction of Heads for me was the family feel that I got coming here and meeting the team.

I went to a couple of other places where I felt like I could have been just a bit of a number, a bit of a cog in the machine, whereas here it’s a small team with loads of experience and I thought I could learn – which has been the case and I’ve loved it so far.

What are your key learnings from your time in recruitment?

I would say you get out what you put in.

Whereas jobs in the past I’ve had it doesn’t matter how much work you do, you and the next person will get paid the same, but here you really do get what you put in.

Work hard and put in the work, you’ll be rewarded for it.

Another key learning is probably around the strength of relationships.

What three words would you use to describe Heads?

What are some of the highs and lows of your time in recruitment?

A low was probably for me after a couple of months when I thought I’d made my first placement and the offer had been accepted and it was right at the eleventh hour, candidate, unfortunately, pulled out.

So that was a bit of a low, but I understand that it’s just part of the job.

As for the highs, I had five placements in January, which was really nice and a good feeling working on a retained campaign that we had.

What’s the best thing about the role?

One of the best things for me is probably all the people you get to meet.

You get to speak to different people each and every day and often help facilitate good things in their lives as well as the career progression.

For me, when I was at University, I thought I would do something to do with my degree, but coming here, there’s a clear career path laid out for me and I’ve got role models within the business who I can look up to and see where I can get within both short and long term periods.

So that’s the great thing about this job.

Why would you recommend someone joins Heads?

I would recommend someone to join Heads as it’s a great team, everyone’s really friendly and it is really easy to fit in and the business really looks after us.

We’re treated really well day in, day out as well as sort of planning for the future, I think is a massive reason to join here.

There are clear plans laid out and goals over the next months and years, so it’s a great place to be.

Want to join us? Apply now! 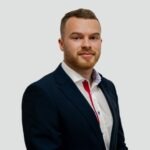 FIND OUT MORE ABOUT
Will Cooke