Anna Thorncroft is Head of Procurement at MTR Elizabeth line, the operator of Crossrail.

She started her procurement career in food manufacturing working for Dairy Crest then moving into food retail in the Procurement team at Pret a Manger.

She joined the team at MTR Elizabeth line a year ago and recently spoke with Procurement Heads‘ James Dobbin about her career and her passion for developing strong Procurement teams to deliver improved business performance and added value.

How did you get into Procurement?

I think like most people I didn’t set out to have a career in Procurement but did a languages degree and thought I wanted to be a translator. After I graduated I moved to the south of China to do some translation work and quickly realised I really didn’t like the role.

It was quite an isolated job and I realised quite quickly what I did and didn’t want from a career.

I did a module in my final year called Chinese for International Trade and Business which was just buying role plays using the Chinese language, it was like a whole module centred around Procurement and I really enjoyed it. It was my favourite module throughout uni and thought I would look into it further and try and become a Buyer.

I got my first job at Dairy Crest as a Procurement Coordinator and it all went from there.

What challenges do you face, if any, as a woman in the industry?

I think early on in my career I would say it was visibility.

I guess early on it was about becoming visible and establishing a presence in the team.

I had to learn a lot about engineering and know my stuff to be able to get that platform but I would say that was the only real challenge.

How would you say we could encourage women to choose Procurement as a viable career?

I think it is around raising awareness and how you market Procurement as a career to women.

Procurement is never mentioned as a career option in schools or university.

There are a lot of industries women want to work in but they don’t know that Procurement is a role within these industries.

It is a recognised profession with a chartered institute (CIPS) and something you can get a recognised qualification in.

I think it is about marketing and making sure people are aware of Procurement as a career opportunity within industries that women may want to work in.

Is there anyone throughout your career that has really inspired you?

The biggest inspiration in my career has been the Head of Procurement I worked for at Pret. I learnt everything I know from her.

She paved the way for Procurement at Pret, established the function, sold Procurement into a company that wasn’t interested in having a Procurement function and developed it to a really well-established function within the business.

I often think, “What would Amy do?”

Is there anything you would have done differently throughout your career?

Yes, I think the one thing I would probably start studying for MCIPS sooner.

I have heard others say they wish they had done it later, but I wish I had started when I began working in Procurement because there is a lot of theory and knowledge you can have behind you.

Do you think women are fairly represented across the profession?

I think it is only going in the right direction.

At the recent CIPS Awards, there were lots of female nominees and lots of really strong entries from women – it can only improve.

It probably is still  under-represented at a leadership level and I think female representation is also skewed across  industries as well, so it is a case of  getting women into leadership or entry-level roles in industries where women have less of a presence like engineering and manufacturing and transport.

Tell us about your current role

I am the Head of Procurement at MTR Elizabeth line, which is the operator of the Crossrail concession for TfL. We currently operate two sides of the route, Liverpool Street to Shenfield on the East and Paddington to Reading on the West. When the line opens end to end it will be operating through the central London stations on the route also.

My team looks after all of their indirect procurement and procurement to support construction projects, so all of the services you would associate with running the railway: uniform, agency labour, professional services that type of stuff.

It is a small team, which is growing, and we have really strong procurement professionals in the team. I report into the Finance Director.

What would you say is essential to be a good Procurement leader?

I think the key is building a strong function, understanding your team, your stakeholders and your suppliers. Having a more human focused approach to procurement.

Understanding what they all want out of a situation, a negotiation and a relationship,  is really important.

I think it is important to know how to sell the Procurement function into the organisation.

When you have on the job Procurement experience, and you have studied for MCIPS, you know how great procurement is as a discipline and how much value it can add to the business by driving business improvements; but this doesn’t always translate well to the stakeholder, procurement can easily be viewed as a blocker.

I would also say resilience. You need to have a bit of thick skin.

Procurement isn’t always liked by everyone, it is important not to take knockbacks personally.

How do you coach that resilience?

Letting people know that they’re probably not going to get what they want from a situation the first time and that there will be some stakeholders who can be a bit harder.

The more of a challenge you get, the more rewarding it is.

So it is coaching them to not give up and keep on with it.

And how about emotional intelligence?

I think it is around making sure that you are not just pushing the Procurement agenda.

I would always make sure if someone in my team is doing some work for someone that they try to build an understanding of the stakeholder, the category and the client base.

You need to have some kind of category plan in place or a negotiation plan, but it is also about listening to the stakeholder and understanding what they want to get out of the relationship and negotiation.

It is around getting them to do that work in the background and with the stakeholder as opposed to just doing the technical side of things behind closed doors.

What makes a good negotiator?

Listening skills. It is not the only thing but it is very important.

I think people in a negotiation think it is about putting your stake in the ground first but I think it might take a few goes to understand that if you listen first it is more beneficial.

What is your biggest achievement to date?

Being in my role before I turned 30 is something I am very proud of.

I am also very proud of being nominated for the CIPS young talent award this year.

What do you like to do in your spare time?

I love running even more so now since the lockdown.

I also enjoy the gym, playing netball, food and travel.

What was the last holiday you went on?

I went to Istanbul and the southwest coast of Turkey.

It was amazing and one of the best holidays I have ever been on.

I had a bit of a different experience due to COVID, but it was amazing to be able to visit.

What advice would you give to your younger self?

Always have the courage of your convictions.

Don’t be afraid to speak up, make the comment in the meeting, and set a conversation up with someone. If you have an instinct, follow it and always be open to continuing to learn.

Tell us an interesting fact about yourself…

I can speak fluent Mandarin, which has come in useful.

During the lockdown, I had the opportunity to refresh it.

You need to keep it going and keep it fresh in your mind. At Pret, I had a colleague who spoke Mandarin in the finance department and I was lucky enough to be able to speak to her a lot which helped.

I did Chinese and International Relations at uni and I lived in China as a child. 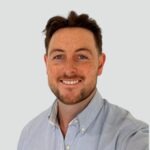 FIND OUT MORE ABOUT
James Dobbin